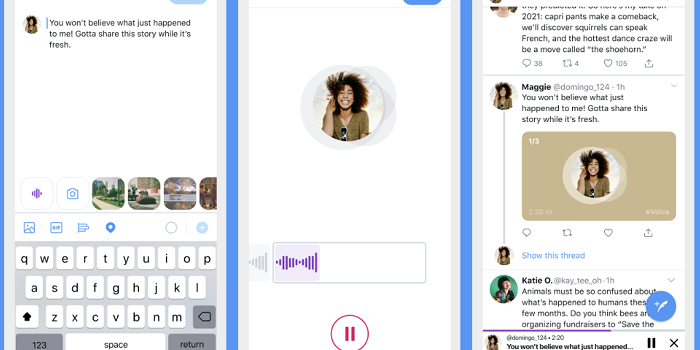 Twitter has launched the option to add audio clips of 140 seconds in tweets on iOS. According to the company, the new feature is available first on iOS and launching today for a limited group of people.

If you have got access to it, you can see a waveform icon beside the camera icon when creating a tweet. Tap that, and a red record button appears at the bottom of the screen, which you can tap to start recording your message.

Each voice tweet captures up to 140 seconds of audio. Have more to say? Keep talking. Once you reach the time limit for a tweet, a new voice tweet starts automatically to create a thread,” Twitter said. Audio can be added in original tweets, so you can’t add audio in replies.

Your profile picture will appear in the center of the playback while audio clip will pop up in the stream and in tweets.

One thing that’s certainly an open question is how audio tweets will add to Twitter’s abuse problem. Twitter has plenty of challenges when it comes to flagging harassment among text-only tweets, which are much easier to auto-flag with machine learning tools. Decoding abuse in audio snippets is a much taller order for these systems.

We hope voice Tweeting gives you the ability to share your perspectives quickly and easily with your voice. We can’t wait to see how people will use this to make their voices heard and add to the public conversation.

When will voice tweets be available to all?

Twitter launched voice tweets on 17 June 2020 for the limited group of people. Who uses a Twitter app on the iPhone. Voice tweets are considered an early test for iOS users, so there is no guarantee they will roll out to all Twitter users